Ferrovial Agroman is one of the world leaders in the construction of major transport infrastructures. It is also recognized for its ability to execute all types of civil engineering, industrial, building and water projects.

It has a stable presence in strategic markets such as the United States, Poland, Spain, UK, Australia, Canada and Latin America.

Ferrovial Agroman focuses its activity on the international construction market, which is characterized by major competition from both global constructors and local firms. Unlike its competitors, its strategic approach is focused on activity in major selected countries, with developed economies and a firm commitment to modernizing their infrastructures. These countries contribute a tangible pipeline of more than 130 B€ in technically complex projects, giving grounds for optimism with respect to the future.

The historical commitment to the Polish market through Budimex presents a positive outlook in the medium term, following the new Government’s renewal of investments at the end of 2016 in Highways, Railroad and Energy.

The focus on international activity has allowed the company to overcome the major contraction of the local market in Spain, which continued into 2016 despite an incipient recovery in private building.

The Construction business is characterized by high volumes and tight margins, so adequate selection of projects and optimal risk management are key, both at the bidding and execution stages. In the first phase countries with sufficient physical safety and legal certainty are chosen, with projects where Ferrovial’s competitive advantage and its expert partners can be a determining factor, avoiding errors in price, deadlines and contractual conditions, which are difficult to mitigate subsequently in the execution phase.

As a result of this risk management culture, Ferrovial Agroman has, for example, been recognized by major international clients for the execution of high-speed rail projects, where few contractors offer sufficient guarantees because of their size and technical quality and safety standards. In 2016 Ferrovial Agroman has been awarded major contracts such as the Design & Build (D&B) of Package 4 for California High-Speed Rail and the Early Contractor Involvement for the planning, design and preliminary work on the Central Section of the High-Speed 2 (HS2) London-Birmingham line.

Ferrovial Agroman maintains its international focus on five key countries: United States, United Kingdom, Poland, Australia and Canada. In addition, it is present in stable countries in Latin America (Chile, Colombia, Brazil and Peru, within others) and other selected countries, through large specific projects with local expert partners, such as the D4/ R7 highway in Bratislava (Slovakia) awarded in 2016.

Exceptional and complex projects, with broad diversification between sectors

The company specializes in the execution of projects of extreme technical complexity, including not only transport infrastructure but other major civil works, industrial, of singular construction and water treatment plants.

It stands out from its peers through the experience and international presence of its Technical Office, focused on the search for optimal engineering solutions for each client and project. In 2016 it signed the contract and completed the financial closure of the DB&F for the I-285/SR 400 highway in Atlanta, USA, located in an area of high traffic congestion. Its unique design will mean a total saving for users of 20,000 hours per day, also minimizing the impact of the work in a zone in which 5,000 companies are located and 123,000 people work every day.

Of note is the growing diversification in industrial projects, with a number of significant projects being executed, the completion of the incinerator in Bialystok, Poland, and new projects such as the incinerator in Vilnius, Lithuania, and two hydroelectric plants in Portugal. There has also been a stronger focus on water treatment plants in Texas (USA), a market with great potential following the acquisition of the specialist Pepper Lawson.

Innovation as a motor for continuous improvement

A good example of this is the gradual implementation of Ferrovial Agroman Infrastructure Lifecycle Management (FILM), which implements Building Information Modeling (BIM) construction design and management technology across the complete life cycle of infrastructures and buildings.

Ferrovial Agroman has used BIM in more than twenty major international projects, such as the M8/M73/M74 highway (UK), recognized in the Irish BIM Innovation Awards, the Warrell Creek highway in Australia, the Thames Tideway Tunnel project in London (UK) and the North Tarrant Infrastructure highway in Texas (USA).

Cost control and planning of the project is an essential part of Ferrovial Agroman’s culture. It has developed proprietary tools such as the In-Site project management system, which provide quick and flexible control, with the necessary level of detail.

This is one of the reasons why the company has had a much higher continuous return on sales than its main European competitors for the last few years. In 2016 EBITDA over revenues was again over 8%, with the normal high cash conversion, as demonstrated by the flow of operations before tax of 245 M€.

In 2016 Budimex received the Wprost Eagle award in the Biggest Average Profit category, valuing its contribution to the economic development of the country.

The collaboration with the rest of the company’s businesses allows Ferrovial Agroman to offer an integrated solution that provides added value for clients, while maximizing the competitiveness of bids and allowing compliance with the profitability and cash management targets.

The success of this collaboration was reflected in 2016 in the award of major projects such as the I-66 highway section Virginia, (USA) together with Cintra. The key was the optimization of the design that exceeded the standards requested by the client.

The company is notable for the experience, mobility and high professional worth of its teams. It maintains the talent of its professionals, while adding local and technical knowhow through new recruits and retaining the youngest workers by offering attractive opportunities for career development.

Ferrovial Agroman was also recognized for its quality in the United Kingdom, with the Gold Award at the Considerate Constructors Awards for work on Heathrow Airport, rewarding the commitment to improve the quality and image of construction in accordance with the highest standards.

Ferrovial Agroman believes that new standards of performance, technology and safety measures can be developed through innovation, contributing to the achievement of the Target Zero accidents goal. In 2016 the LBJ Express Highway in Texas (USA) received the Award of Merit for Safety from the Engineering News Record, and the subsidiary Webber received the Contractor Safety Award from the American Road and Transportation Builders Association.

The company’s commitment to the environment has seen it create solutions that reduce the firm’s environmental footprint as far as possible. Evidence of this is the Green Apple Gold Award granted to the work on the Northern Line Extension of the London Underground (UK), for the implementation for the first time in a large infrastructure program of a system capable of measuring environmental parameters in real time. 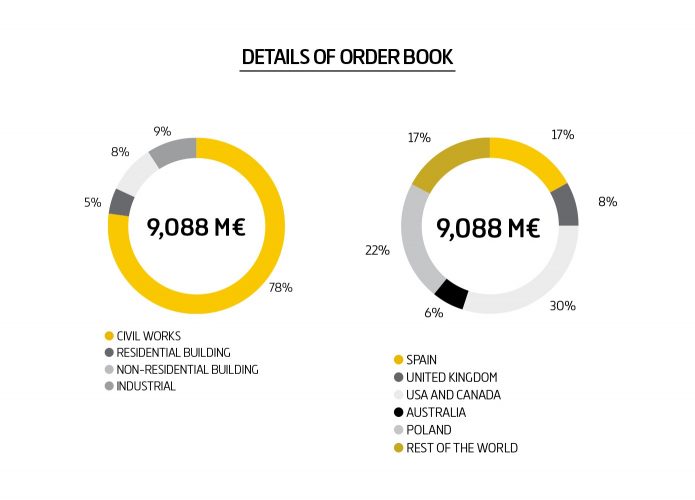 This 2 B€ project includes the execution of 35 km of highway along the I-66 corridor between Route 29 near Gainesville, and the Washington D.C. beltway. I-495. It is an example of value provided for the client and the community. The design exceeds the standards required, eliminating 57 conflicts in the services affected, avoiding expropriation of nearly two hectares, maintaining all the current lanes operational during the construction phase and improving traffic safety at 15 specific points.

Two Ferrovial Agroman employees were awarded as “Best Woman Contractor” and “Best Woman Civil Engineer”, at the European Women in Construction & Engineering Awards (WICE Awards), which recognize the best female professionals in the construction and engineering sectors in Europe. Ferrovial is firmly committed to effective equality of opportunity between men and women, which involves establishing internal mechanisms to bring out women’s talent inside and outside the organization.